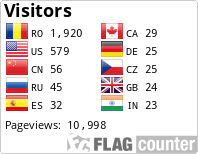 The conference will be held at The Petroleum-Gas University of Ploiesti, Romania.

Ploiești (Romanian pronunciation: [ploˈjeʃtʲ]; older spelling: Ploești) is the county seat of Prahova County and lies in the historical region of Wallachia in Romania. The city is located 56 km (35 mi) north of Bucharest.

According to the 2011 Romanian census, there were 201,226 people living within the city of Ploiești, making it the 9th most populous city in Romania.

Ploiești is situated on the future highway Bucharest - Brașov, the main path towards the north and west provinces and the Western EU. The Henri Coandă International Airport is just at 45 km (28 mi) distance, and the ski resorts from Prahova Valley can be reached in one hour driving.

Ploiești is the second railway center in the country after Bucharest, linking Bucharest with Transylvania and Moldavia.

The conference venue can be reached by public transportation. Take bus 30 from Gara de Sud (right in front of the railway station).

Ploiești is home to the Petroleum-Gas University, Ploiești Philharmonic Orchestra - one of the top-rated philharmonic orchestras in Romania and a prominent football club in Liga I, Petrolul.

There are many cultural and architectural monuments, including the Cultural Palace; the Clock Museum, featuring a collection of clocks and watches gathered by Nicolae Simache; the Oil Museum; the Art Museum of Ploiești, donated by the Quintus family; and the Hagi Prodan Museum, dating to 1785: the property of a merchant named Ivan Hagi Prodan, it contains elements of old Romanian architecture and for a short time after World War I it hosted the first museum in Ploiești, "Prahova's Museum".

The climate is similar to that of the nation's capital, Bucharest. According to the Köppen climate classification, the city falls within the temperate humid continental climate (Dfa) of the hot summer type.